Yesterday I woke up depressed, and rather than doing my usual things to raise my vibration, I decided to sit down and take the entire quest on Mindvalley by Sadhguru. It’s called A Yogi’s Guide To Joy, so I thought maybe it would give me some tools to have an easier time moving towards joy when I wake up feeling like crap. The quest was really good. It did help me raise my vibration. It’s not what I thought it was going to be, though. 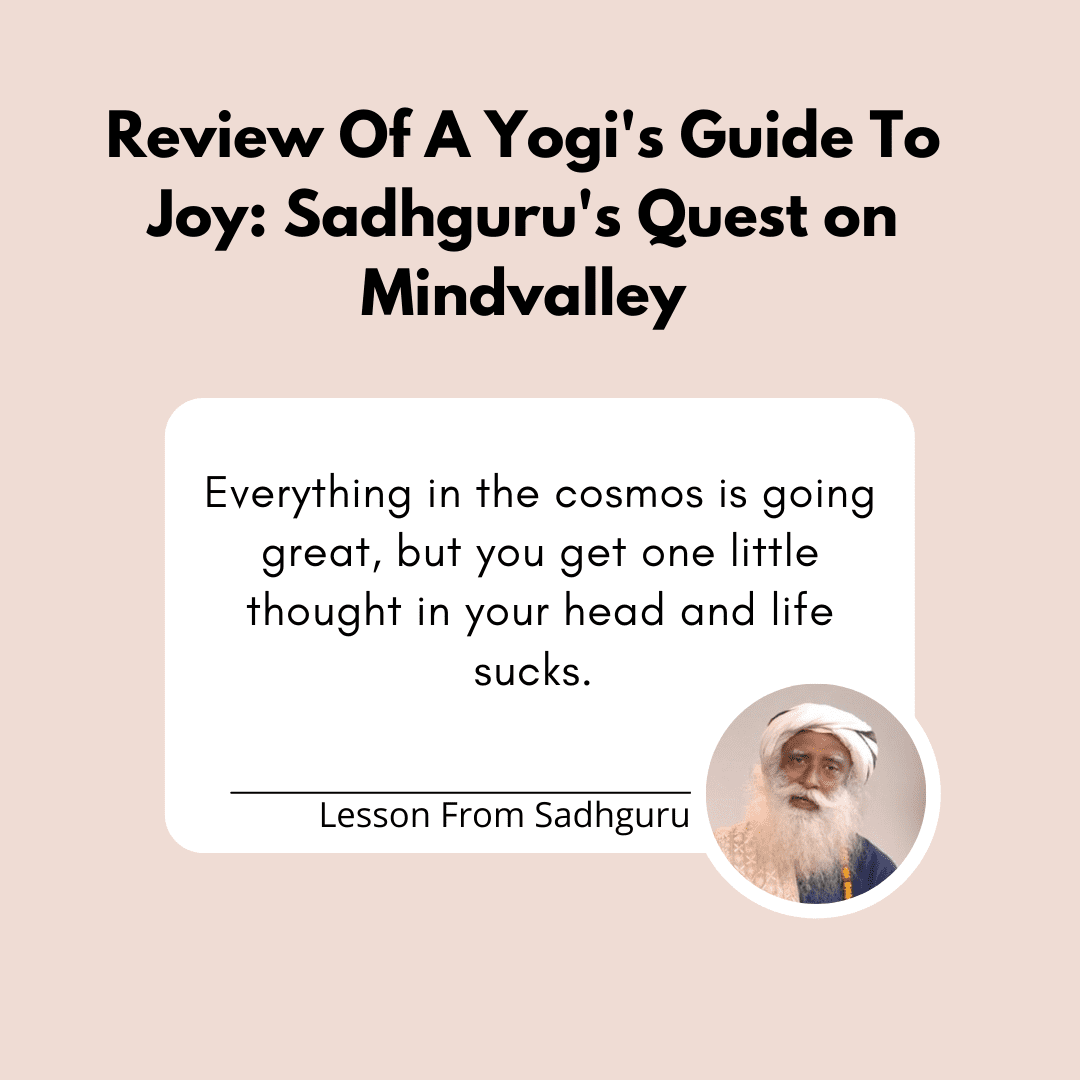 I’m glad they created a quest by Sadhguru. I know that Jon Butcher from Lifebook talked a lot about Sadhguru before Sadhguru was brought on Mindvalley, so I’m sure that’s why Vishen brought him in.

But, the thing is that you can find almost all the videos in the Mindvalley quest on Sadhguru’s YouTube channel.

There are some videos in the first few classes that are bonuses, which are simply from an interview that Vishen Lakhiani did with Sadhguru a while back on Mindvalley. But, other than that, you can find all the lessons and the practices on YouTube for free.

I was surprised by that. Mindvalley usually does quests in a studio, even if the teacher’s content is similar to other content out there, Mindvalley at least films it in their own studio.

I guess the stuff that was pulled from Sadhguru’s YouTube is focused on three specific topics, though:

And the content was curated to match those topics in a logical order. So it gives Sadhguru’s quest a flow and logical order that you may not naturally do while watching his videos.

There are only 15 lessons in Sadhguru’s quest, but they total up to just over 3 hours, so there’s a lot of content.

Some Sadhguru Quotes From The Quest I Liked

This is because life is always changing. He even talks about how one moment is inhaling and the next is exhaling… change.

“Unhappiness and depression are inefficient ways of killing yourself.”

As I mentioned, I woke up depressed yesterday, so this quote really knocked me out of it quickly. It’s so true. Sadhguru says that you start with frustration and then move into depression, and that’s what starts to destroy your life. I don’t want to kill myself slowly or quickly, so my mindset quickly moved me up the vibrational ladder to a better emotion.

“All human experience is generated from within”

This was just a great reminder to stop blaming everyone and everything else. I’m responsible for my own experience.

Sadhguru talked a lot about how people say things like, ‘I am only human!’. But that reduces the potential that we have when we say those things. We are not human ‘beings’, because we are always changing and have a lot of potential.

One Of My Favorite Thoughts From Sadhguru’s Quest

Sadhguru said in the class titled ‘The End Of Suffering’ that if there’s only one thing that makes you feel good, you can’t maintain that thing for 24 hours.

To me, that means don’t depend on that one thing to make you happy. Find happiness in everything. Enjoy the moment. Enjoy what is. Don’t count down the minutes until you can do that one thing or be with that one person again because you are missing all the minutes in between.

Moreover, it makes you miserable when you believe that only one thing can make you happy, especially when you don’t have access to that one thing.

Some Deeper Exercises Would Have Been Nice

There are some points that could have benefited from further explanation or exercises to help back up what he was saying.

There are ‘tools for transformation’ in the course (these you can find on YouTube too), and they are meant to help make you more blissful.

For example, Sadhguru talks about how putting your hands together in alignment at your heart while looking at something you love for a few minutes every day is good for creating loving attention.

Moreover, listening to Sadhguru promotes mindset change, which can help you to be more blissful.

But I think since all of the content is either from Sadhguru’s YouTube channel or the interview with Vishen, they could have added in some more things that made their quest stand out as unique and could have further helped us implement the things Sadhguru talked about.

My Favorite Exercise From Sadhguru

The following video from Sadhguru’s YouTube channel is one of the exercises in the quest. It involves making the sounds aaa, ooo, and mmm.

I really liked this exercise. He explains what the sounds do, which made it even more beneficial for me. I’ve been working on my energy and chakras with Reiki and when he said that below the navel (where I’ve been having all my problems) is where all the pathways of energy meet and redistribute themselves. You better believe I was focused on my aaa sound more.

I love the sound I hear in my head when I do these noises and the feeling I get. This is something I’ll probably do quite often.

It was funny because I used to do this years ago with someone else, but I haven’t done it in front of my dog. I admit that I kept peeking to see what he thought, and his reaction was so adorable. He was looking at me like I was crazy, and he kept looking at my upturned hands, which I thought was so cute.

I recommend doing this exercise. It feels good.

I also enjoyed an exercise where Sadhguru got you to say, “I am not the body,” during the in-breath, and “I am not even the mind,” during the out-breath. I plan to use this during my next Reiki session.

I normally say something with the breath in and out. I think these statements will help me stay present and focus on the energy in me.

Apparently, if you practice Isha Kriya every day, it will bring about health, prosperity, wellbeing, and dynamism. It will help you to live life to the fullest.

One part of the Yogi’s Guide To Joy quest that I didn’t buy was in a lesson when Sadhguru was talking about what he does on his days off. He says that he doesn’t even have a thought when he gets days off.

Really? You don’t have thought? I don’t believe that.

He is human. Humans have thoughts.

Maybe he meant he doesn’t have thoughts that make him suffer or any that create psychological drama, which I could believe, but the way he said it, he made it sound like he doesn’t have a thought at all.

I enjoyed the quest. I wish I could be in his state of mind and see the world from his point of view. That would be something.

I like his simple way of explaining things. I just wish he gave more examples in the quest of how to achieve what he was talking about. Maybe he does on his YouTube channel? I’m going to start watching and see. 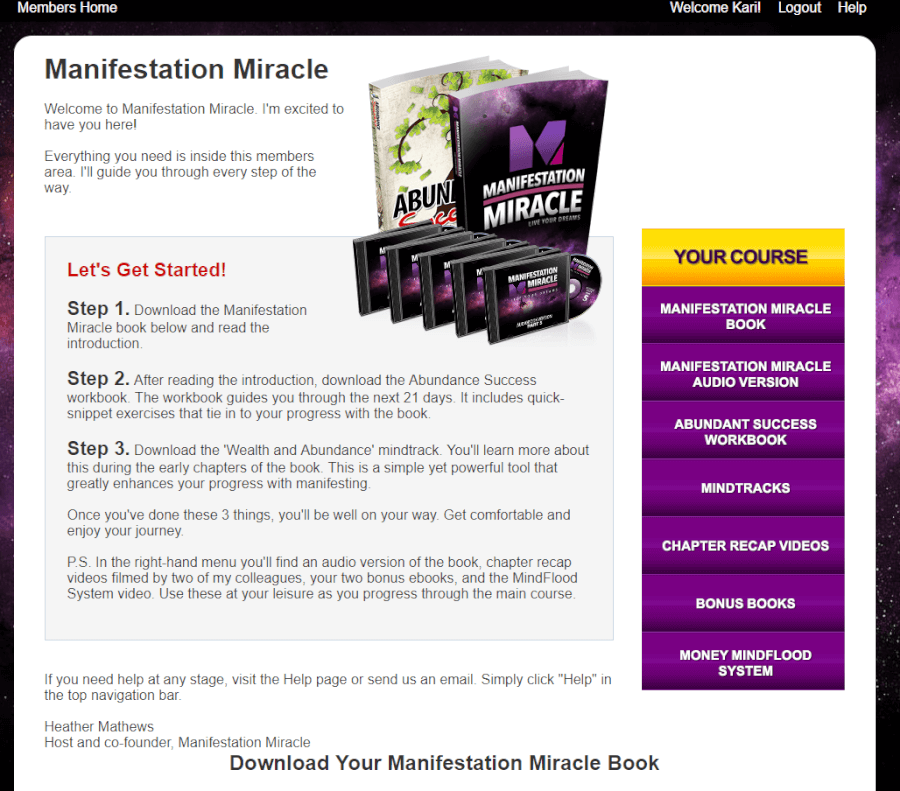