A few weeks ago, I was watching Dr. Joe Dispenza speak at the Hay House Healing Summit. I had planned to watch the entire summit, but I only ended up catching his lesson. I’m glad I did. If you’ve read any recent articles on my site, you know that my health is a priority right now, so his lesson focusing on how we can heal ourselves was perfect for me to hear. I wanted more, so I ordered his book, Becoming Supernatural, that same day. Here’s my review.

There Were So Many Thought-Provoking Insights 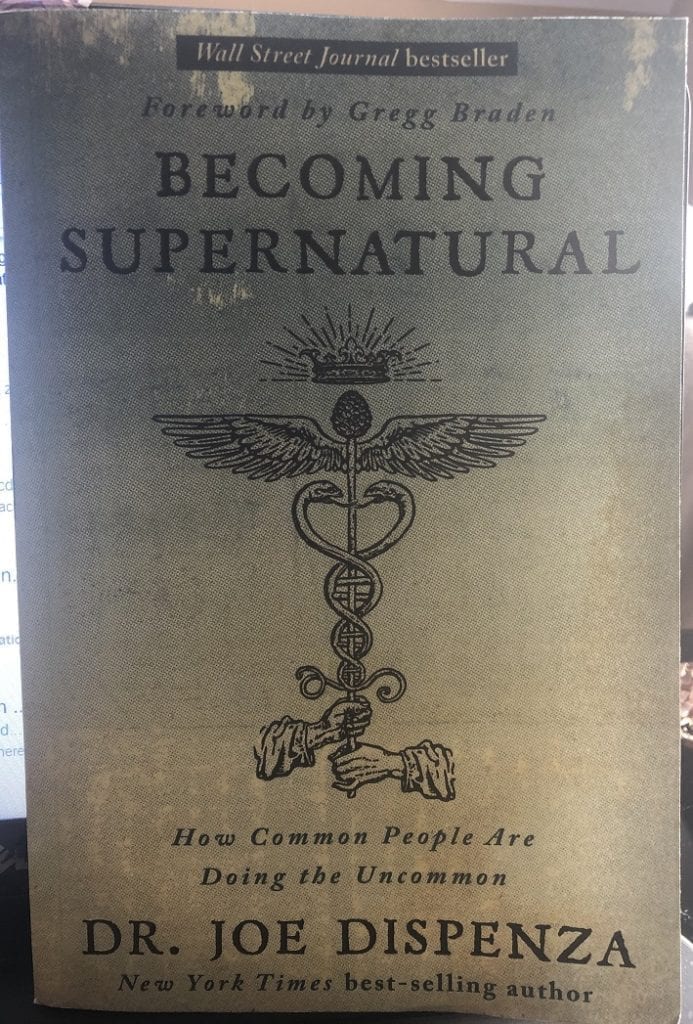 Learning about healing yourself and creating the life you want is fascinating to me. I’ve long known that we have a supernatural power that most of us don’t use or haven’t tapped into. Especially when it comes to health.

I’ve seen my dad instantly heal his Lupus because he was told by a doctor that he wasn’t sick. That thought penetrated every single cell in his body and all his symptoms disappeared. It was the most awesome thing I’ve ever seen. My dad didn’t look sick – and he had physically looked sick for over 30 years. He didn’t act sick. He was a normal senior man and it blew me away that he was able to heal himself. Then, a while later, his ‘specialist’ told him that there was no way he could cure his Lupus and INSTANTLY my dad was sick again. I mean within a few minutes of being told that he wasn’t sick, his skin looked sick, he was sore, he couldn’t move well, and he started having all the problems he had before he had healed his body. My father puts a lot of trust in ‘specialists’. Unfortunately, this ‘specialist’ does plastic surgery and tackles skin issues and knows nothing about Lupus. But, because my dad has been with him since he was first diagnosed, he puts too much faith in him and lets him control his health. I’ve seen this doctor promoted by Mindvalley and it took all I had not to rant and rave about what a low life he is. There is only one person in this world that I can’t stand with every fiber of my body, and it’s my dad’s ‘specialist’. Instead of allowing my dad to be healthy, he put him back in his sick place for financial gain, and it pisses me off.

I’m getting way off track…

I learned a lot from this book. A few of the things I learned were:

He Talks About Mind Movies

Mind Movies offers software that allows you to make dynamic vision boards with images, affirmations, and music. I just wrote a review on Mind Movies. I had talked about how someone in a Facebook group talked about Mind Movies for creating vision boards, so I checked it out. And now I can say, without a doubt, that it will be a constant tool in my personal well being toolbox.

Just a few days ago I got to the chapter in Becoming Supernatural that is actually titled Mind Movies/Kaleidoscope. I didn’t think it would be about the actual mind movie software, but it was! Tuns out that Joe Dispenza uses Mind Movies with participants in his advanced workshops.

I had a big aha moment in this chapter. Music can remind us of the past, but it can also help you create your future through the dynamic vision boards. It makes sense that if you pick a song to go along with the images and affirmations you want to soak in, then that song is going to provoke those images and affirmations when you hear it. It’s a great way to feel like your images are a part of your present moment.

This is why I went back through my Mind Movies and picked some popular songs that I can pull up on Alexa or hear on the radio. I want to be reminded of my ideal self often. I feel like the more exposure I have to the images, affirmations, and messages, the faster I make them a part of who I am.

While he does teach meditations throughout the book, he doesn’t include the audio meditations with it. In other words, you learn how to do it and can go ahead and do it on your own, but if you want a guided meditation, you have to go to his site and buy the meditations separately.

I found myself easily doing the meditations after I read about them. There were no problems. I didn’t need to be guided by anyone.

I did try to listen to a Joe Dispenza guided meditation on YouTube, and I found his voice very annoying.

Following is the meditation I tried. I couldn’t make it past the 5-minute mark. I like his voice when I listen to his lectures, but for meditation, his voice is harsh and annoying to my ears. Maybe it’s just me?

To be clear, it’s not that I can’t relax during a guided meditation. I have listened to a lot of beneficial guided meditations and hypnosis sessions in my time. In fact, I’ve been listening to sessions from Hypnosis Downloads daily for the past month and the narrator has a soothing voice that is easy to listen to and relax to.

Joe Dispenza does not.

He Talks About His Workshops A Lot

I saw a review on Amazon that complained Becoming Supernatural was just an ad for Joe Dispenza’s workshops.

He does talk about his workshops a lot, but that’s because they are a big part of his research, discovering, and teaching.

So, yeah, you finish the book knowing that he has these workshops – and you might even find yourself wanting to attend them – but it’s not an ad for his workshops by any means.

Some Parts Aren’t The Easiest Read

Becoming Supernatural had a few chapters where I really needed to focus in order to comprehend what I was reading.

For instance, Chapter 12 is about the Pineal gland. I liked the topic and was interested in it, but it was really hard for me to focus on the words because it was… a lot.

I could literally hear him rambling off the science behind what he was talking about with a lot of passion – and since he is a neuroscientist his lingo is in line with his knowledge. But for the layman person (or, again, maybe just me), it was a lot to comprehend.

It was in Chapter 10 that I realized a good, quick summary of the book was that it offers tools to create a new future. You get the insights needed to understand how you can create a future you want and then learn what need to do in order to do it.

If you want to heal yourself and transform your life, Becoming Supernatural is something you are going to want to read. The information is interesting and will impact your thought processes about healing and creating in a positive way, which will impact your behaviors.

His meditations are a natural part of my day now. I find myself waking up and practicing them as I drift back to sleep. Even when laying out and looking at the stars, I found myself doing his blessing of the energy centers meditation (I just call it the chakra meditation), which is my favorite meditation in the whole book. Joe Dispenza says that it is one of the most popular meditations he teaches, and it has created a bunch of supernatural results.

Becoming Supernatural is about taking your health and future into your own hands. And, when you finish the book,  you will understand that it’s entirely possible to do.

If you feel like putting a laughing emoji on that statement, then the book is NOT for you.

But, if you are nodding your head or resonating with that thought on any level, then you will want to read it, for sure. It will be worth the time and energy investment.

You can learn more about it, read more reviews, and buy it all on Amazon here.