We don’t have a lot of the popular brand name vegan cheese around us. We do have some of Miyoko’s cheese wheels and we do have Daiya, but when it comes to new vegan cheese products, my area doesn’t seem to bring them in. But, that’s OK, because I can order vegan cheese online from a province over and receive it within a day.

The good thing about vegan cheese being delivered over a day is that it doesn’t come in a gross clump after being left out for too long. It pretty much maintains it’s shape. It can get a little soft, but nothing that ruins it. Plus, I get some ice packs thrown in there so that the cheese stays even more intact as it makes its travels.

Recently, Miyoko’s new cheeses became available to buy at my favorite online vegan supply store, and some Violife products ended up being in stock (I never seem to visit the site when they are in stock!). All of that means that I got a lot of new cheese and two kinds of butter to try. Here are my thoughts on them. 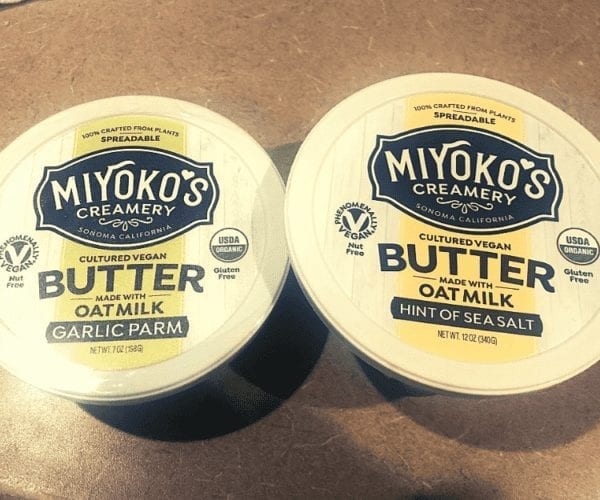 Just when I mastered making something similar to Miyoko’s butter, she brings in butter not made from cashews and flavored perfectly.

The Garlic Parm vegan butter is my favorite butter now, hands down.

We went on a road trip the other day, and I brought alone some buns and this butter, and it was all I needed on a road trip. Well, that and my whipped coffee.

Miyoko’s Garlic Parm vegan butter is flavored perfectly and has an intense but perfect taste of garlic in it. We’ve used it for garlic toast and just as a spread on sandwiches and bread. And, I’ve just eaten it out of the tub, to be honest. It’s that good. I think you would have to like garlic to get it. But, I would assume if you are thinking about buying it, you like garlic.

The Hint Of Sea Salt vegan butter is good too. It just reminds me of her other butter. As you can see in the screenshot above it comes in a tub rather than a block as her first cultured vegan butter does, but it’s pretty much the same consistency as the block butter. 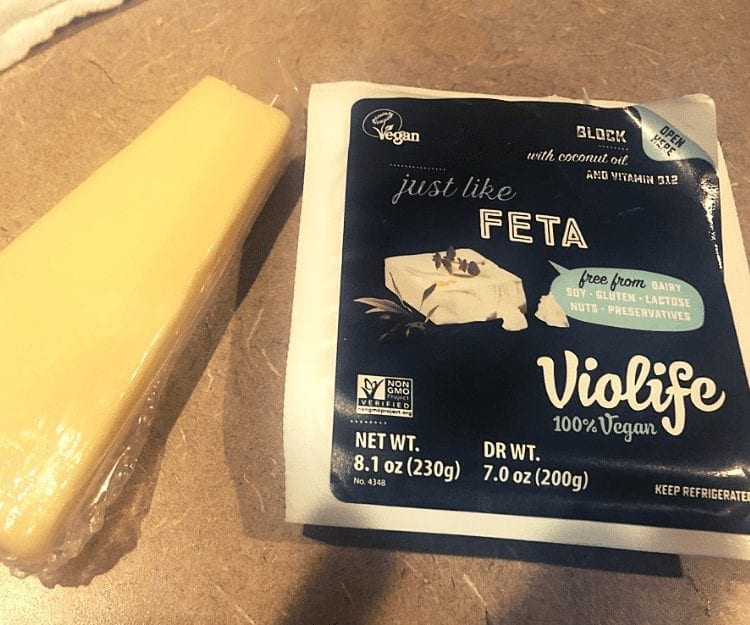 The parmesan is amazing. It’s a hard block and it grates up so nice without any grainy, powdery texture that you can find in some vegan shreds. 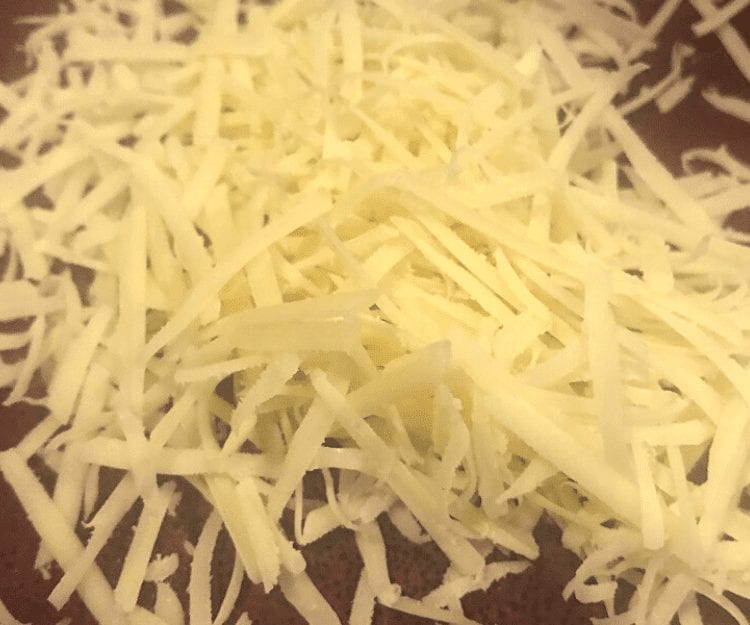 It’s not as hard and gritty as dairy parmesan, but it’s damn close. It’s smoother in texture. The taste is great. It’s got that tangy bite to it that you expect from a sharper cheese like parmesan.

It melted really good on some baked pasta we had. And tasted great just thrown on the pasta as is.

This is my new favorite vegan parmesan. 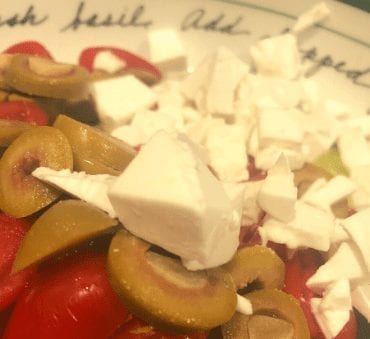 The Violife Feta was something I wanted to try for a long time.

I loved dairy feta cheese and it was one of the last to go before I became vegan. I also liked goat cheese, which is why I know that this vegan feta tastes more like goat cheese to me than feta. It has a tanginess like goat cheese.

Maybe it’s the texture that’s messing with my mind and taste buds. Violife Feta is very smooth and soft, like soft goat cheese. It’s not crumbly like dairy feta was.

Violife Feta comes in a brine, so be careful when you open the package because we ended up getting that everywhere.

I did see someone say that they put their Violife Feta in a homemade salt brine for a bit and then after that the taste was on point. I don’t know if my feta will last that long because I really like it.

Regardless, putting it in a salt brine is not going to change the texture of it. It will still be smooth and creamy like goat cheese.

You can see that in this picture of a  salad we made last night. We put olives, tomatoes, onions, cucumbers, and a tangy dressing in with this Voilife Feta and OMG it was so good! (But the feta still tasted like goat cheese to both of us.) 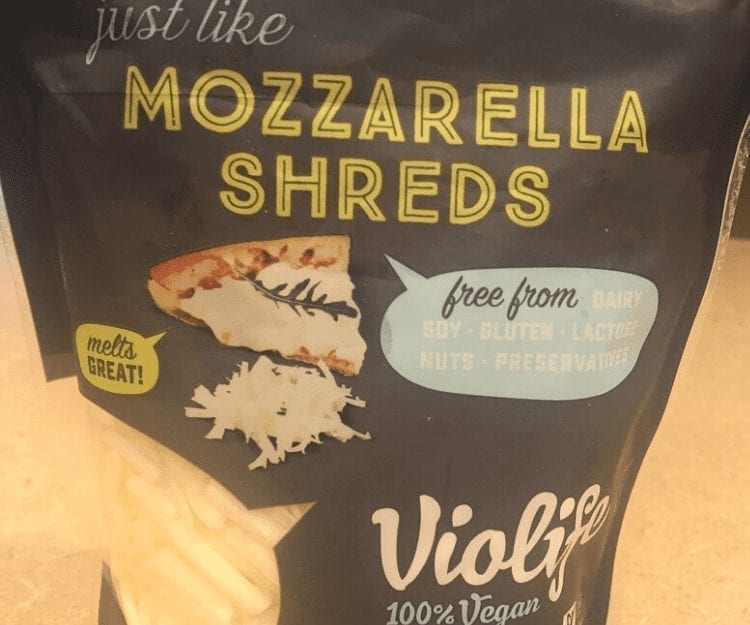 Violife mozzarella is always sold out on the vegan site I buy from, just like their parmesan and feta. So I was so happy to get it. (I must have hit up their site on a day they got a Violife order in!)

I have to say that I didn’t have high expectations for this vegan mozzarella. The cheese I miss the most is dairy mozzarella. I miss it on lasagna and baked pasta and inside of cheese sticks. It’s the only dairy cheese that I crave sometimes still. But, the mozzarella I’ve had since going vegan has not been anything near what dairy mozzarella was like so I’ve learned to lower my expectations.

We made stuffed shells with my vegan ricotta and then threw this Violife mozzarella on top along with some of the Violife parmesan. I also threw the mozzarella in the tomato sauce and it melted inside of the sauce and made it creamy and delicious. 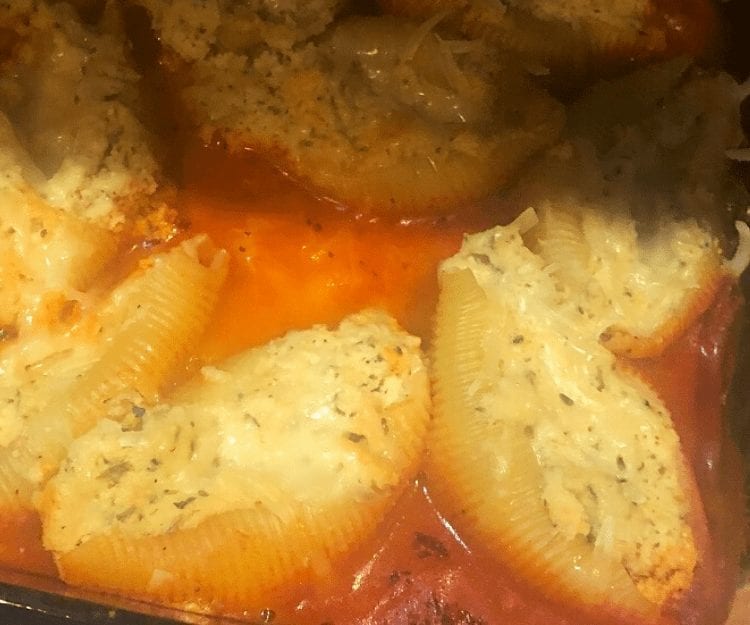 It was so good. The picture doesn’t do it any kind of justice because I’m a horrible picture taker. But, trust me when I say that once it was cooked and broiled it was melted and brown and so good.

It didn’t have that hard chewy taste that baked dairy mozzarella has, but it was creamy and delicious. I think I’m going to try it on lasagna next and see if without all the sauce and ricotta cheese it will develop a more hard texture.

In any case, Violife mozzarella wins my favorite vegan mozzarella by far. I need to try it in cheese sticks! 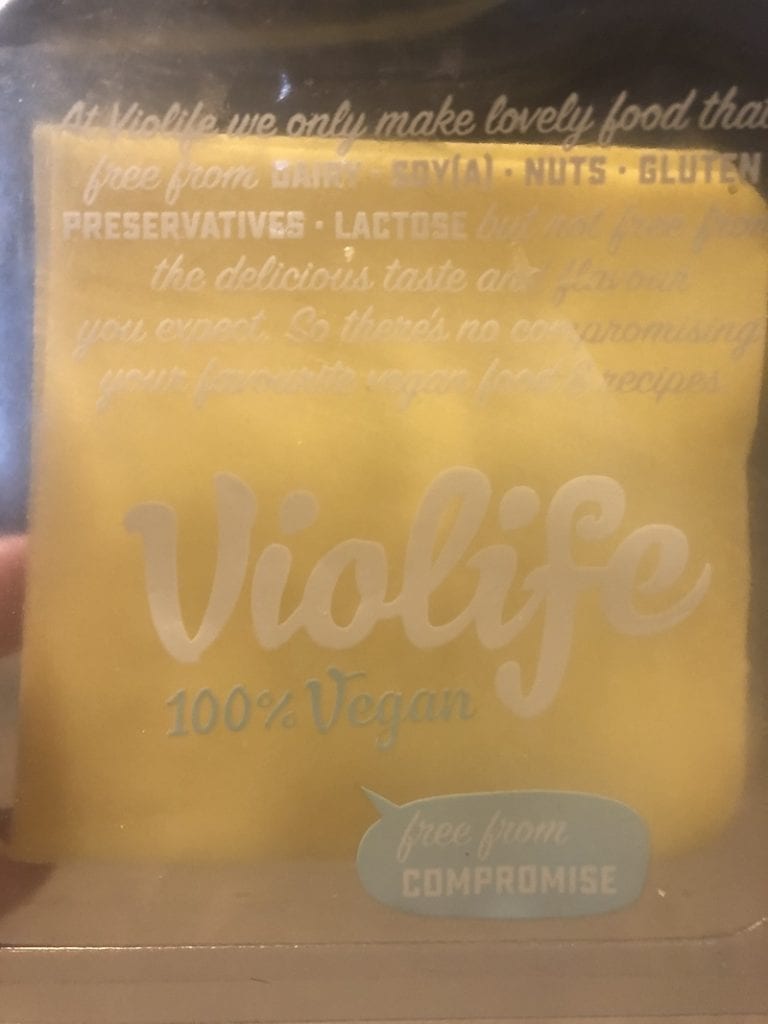 My husband and I used to eat extra old dairy cheddar cheese, so we’ve been trying to find something that compares. We thought this might be it.

It actually tastes like sharp provolone that we used to get from our local Italian Center shop.  So we like it, but it doesn’t taste like the extra old cheddar we used to get.

We’ve been eating this right out of its container because it’s just good on its own. But it would be good on a sandwich of any kind.

These new vegan cheeses were the initial reason I made a big vegan cheese and butter order. I know they just came out not long ago, and I was surprised that Vegan Supply had them so quickly. Surprised, but happy.

I’ve been watching the ads for the new Miyoko’s cheese and was interested mostly by this video. I mean, kids know grilled cheese.

I had watched a review of someone eating them both before I got them and I wish I hadn’t done that. The reviewers said that the cheddar tasted like candy corn, so that’s what I had in my head when we tried it.

It is a little sweeter, I guess, or maybe that’s just because I had that review going on in my head. But, honestly, Miyoko’s new cheddar reminds me of mild cheddar. My husband and I didn’t eat mild cheddar when we ate dairy. We ate extra old cheddar, so we are not used to that mild taste, but we did have it sometimes when out and about, and that is what it reminds me of.

But this new Miyoko’s cheese is made with different ingredients than standard vegan cheese. It has oat milk, navy beans, and garbanzo beans as the first three ingredients.

The texture was really good with all the Miyoko’s cheeses. It’s not the normal feel of vegan cheese, which is almost always too smooth or a little grainy with the shreds. It was just like dairy cheese slices and shreds. I guess the oat milk and beans work as a vegan cheese texture similar to dairy cheese.

We used both of Miyoko’s new cheeses in a grilled cheese (a few times) and the pepper jack seemed to melt better than the cheddar (it could have been how I layered the cheese in there), but they were both nice and creamy.

I used it on nachos in the microwave and it didn’t really melt like dairy cheese, but it tasted good! I haven’t had microwaved nachos with cheese since I’ve gone vegan because I don’t like the taste of most vegan cheese on my nachos. But, Miyoko’s new vegan cheese is a game-changer. Nachos with Miyoko’s new cheese will be my comfort snack going forward.

I will try the Violife Mozzarella on nachos too!

I have tried a lot of vegan cheese over a few years of being vegan. A lot of it I didn’t like. But, I can say that Miyoko’s cheese and Violife cheese hasn’t disappointed me…

… except for Miyoko’s Smoked English Farmhouse. I didn’t like that. It was all smoke and no cheese to me.

But, other than that I haven’t been disappointed yet.

And now Violife has popped into my life as something I would buy consistently.

My favorites from the new things we tried are Violife’s Mozzarella, Violife’s Feta, and Miyoko’s Garlic and Parm Butter.

But it was all good. There’s nothing I wouldn’t eat and if they were closer (I had to pay $25 shipping for this stuff) I would buy them on a regular basis.