In March, I had my first Reiki Session. It was good. I went back to her one more about a month later to give it another go. It was good again. Except, I broke out crying during the second session when she was working near my head. Not because my emotions came flooding out, but because of my alopecia had gotten worse and someone was seeing it closer than me for the first time. I didn’t like it and I couldn’t stop crying as I wondered what she thought about it.

I didn’t go back to her after that. I enjoyed the sessions. They were relaxing and helped to reduce my pain. But I didn’t find it life-changing enough to go back continuously. Especially after such a vulnerable moment for me.

Fast forward to mid-October and I have pain in my lower left pelvic area again. This time the ultrasound found nothing there, but the pain didn’t know that and had been radiating since September 8th. My husband tells me to book another Reiki session because it helped last time and I decide that it’s worth a try because, again, I need to do something instead of sitting around focusing on the pain.

I decide I want to try someone new for my next Reiki experience, so I look in my current town. I find a woman who is available the next day. I book the appointment and cross my fingers.

This Reiki Experience Was Completely Different From My Previous Experiences 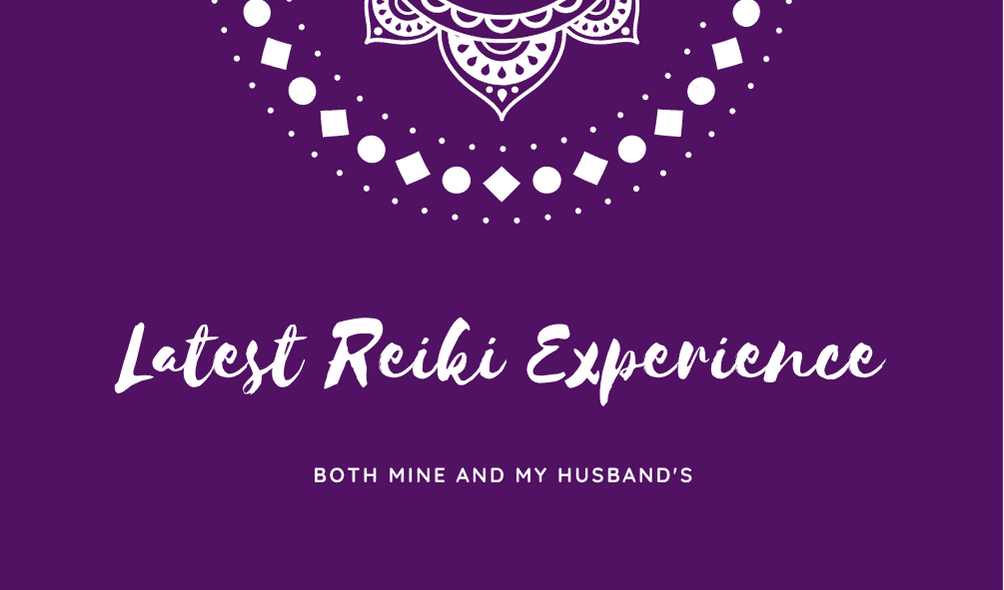 I go in with two intentions: to heal and to NOT bawl my eyes out.

This Reiki practitioner, like the last, runs her business out of her house.

I feel totally awkward going there.

She doesn’t mention anything about masks on her site or in her message, so I’m worried she’s not going to wear one.

Her studio is beautiful, and I instantly feel better when I get in it. I feel like this session might just be what I need.

She says something about scalp work and stones… I can’t remember the specifics.

I tell her I’m all in for anything.

She gets me to lay down on her heated bed.

She places a stone under each of my hands. I worry that I’m going to get uncomfortable because it’s an awkward position for me to have my hands at the side. (I did end up getting uncomfortable later on.)

I shove that worry out of my head and focus on healing.

She stands over me and tells me to be present and focus on a mantra.

This is what I repeat over and over again.

She starts her Reiki at my head. In the first 10 minutes or so, I feel a tear run down my cheek and instantly pull it back up. 😄 Then I focus on not crying for a few minutes and then I get back to my mantra and focus on my breath.

What I Felt, Saw, And Heard During This Reiki Session

Earlier in the year, I felt energy moving from my feet.

This time, I felt it in a few places, including my head.

It was a very interesting feeling in my head. I felt like the energy in my head was distorted – as if the left and right side of my head were moving up and down in opposite directions. It happened a few times and only lasted for seconds, but I’ve never felt anything like that.

I also felt an intense amount of energy in my legs for a few moments.

I still felt the pain in my lower left pelvic during the session. Even after she had worked on the area. But, once I got off the table, it disappeared for the rest of the day. That was the first time I had been pain-free in well over a month.

I saw mountains when she was working around my left shoulder. I was leaping around in the mountains, and it was as if I were there – as real as it feels in a dream. I have no idea why that visualization came to me.

Then, when she was working on my lower left pelvic, I saw a fast-flowing river. Again, I saw it as real as it would be in a dream. It only lasted a few seconds, but it was intense.

Other than that, I didn’t see much. I felt like I saw flashes of white, but it may have been my eyes opening a bit. I don’t know for sure.

This was interesting to me.

I heard someone come down her stairs and walk to the end of the bed, by my feet.

I actually could feel them standing there.

I kept my eyes closed because I didn’t want to break my experience.

When I was talking to her afterward, she told me that nobody had come down.

The Insights I Got From The Reiki Practitioner

She told me things about myself that I already knew. For instance, I like my alone time and I need alone time.

What was cool was that she told me ‘it is good for my soul’. Those are the exact words I used the other day when I went for another solo trip to Jasper.

She told me I was carrying a lot of energy in the front crook of my shoulders and in one part of my leg. I guess it has something to do with carrying around a lot of mental pain and relationship issues.

She fully believed I had 2-3 kids. In fact, when she talked about my alone time, she mentioned something about ‘when the kids come home late’. In case you don’t know, I have no kids and have no plans to have any kids.

Afterward, I really felt like she was seeing my dogs. We’ve always had 2-3 dogs in our house, except for recently. Right now, we only have one, but I haven’t let go of a loss from a few years ago. It’s still so tough for me. He was my first dog and the pain I feel at losing him is still intense. So, maybe she saw the number 2 ‘child’ because of that.

In any case, that was the only thing she got wrong.

She told me there was some tension in relationships. ☑

She told me I was an empath and took on other people’s emotional states easily. ☑

She told me that I was trying to control things and people. ☑

She told me that I needed to be alone and quiet more. ☑

There were other things she told me that were dead on to.

She told me I was strong. I appreciated that.

After The Reiki Appointment

After my Reiki experience with this new woman, I felt very light. I was so grateful to my husband for getting me to go to the appointment.

She told me that I would be tired that night. (I wasn’t that tired. I was content.)

She was going to follow up with me the next day to see any breakthroughs I had.

Here’s what they were:

My husband has been stuck in a negative cycle too. I thought maybe a Reiki experience could help him.

I knew he would feel very awkward going and I fully expected him to say no, but he ended up agreeing to it after a few days of thinking about it. He was a bit reluctant, but he wanted to give it a try.

He saw colors during his Reiki experience. An intense red and brown mostly. He also saw an old-looking baby, who he later decided was a representation of himself.

He felt a little bit of energy vibration in his head and chest. But other than that, he didn’t feel much.

She didn’t go into an intuitive session with him. But she did tell him where he was carrying a lot of energy – shoulders, hips, and back of the neck. All made sense to him.

He left the Reiki session and, interestingly, saw colors brighter. When he got home from his late Friday evening session, he told me that he hadn’t seen the evening look like that since he was a kid. Things were bright and vibrant and stood out.

Other than that, he didn’t feel much different that night.

The next morning, he woke up and sat on the edge of the bed wondering what went wrong. I think he felt like he should feel different, but he couldn’t find that difference. He got up and went about his day.

When I woke up, I noticed a difference in him. The way he carried himself and talked was obviously different. I didn’t say anything because I didn’t want to put thoughts of how he ‘should’ feel in his head.

Later that day he was excited. He told me that he felt like a weight had been lifted off his shoulders. His mental state had done a 180 and he hadn’t felt that free and hopeful for a long time.

The feeling lasted into the next day. He was hopeful and talking differently than he had been for a long time. He was able to get into a really positive state quickly, like me.

He went into work on Monday and sent me a message about two hours after he started saying “Having a good day at work!” with the following GIF of Bubbles.

This was HUGE. Work had been at the center of his negative emotions, so to feel good was amazing.

Looking Forward To My Next Reiki Experience

I have my next Reiki appointment with her in a few days. I’m super excited about it.

I fully believe that I can heal my body, but when I get stuck, I need someone else’s help. And I’m so grateful I took a chance and tried out this Reiki practitioner because I think she’s just the person to help me.

My husband, who had originally said he probably wouldn’t go again, also booked in again with her.

I’m looking forward to both mine and his appointment, and I’ll make sure to write about them.

My advice if you are thinking about booking a Reiki appointment is to just try it. You never know if it could help you and if it does, it feels pretty magical.