In the years since Wayne Dyer passed away, I never heard of anyone talking to him through spirit. But when I heard of the Messages From The Afterlife class, it made sense to me. With HayHouse supporting the medium concept, I’m surprised I didn’t hear of something like this before. 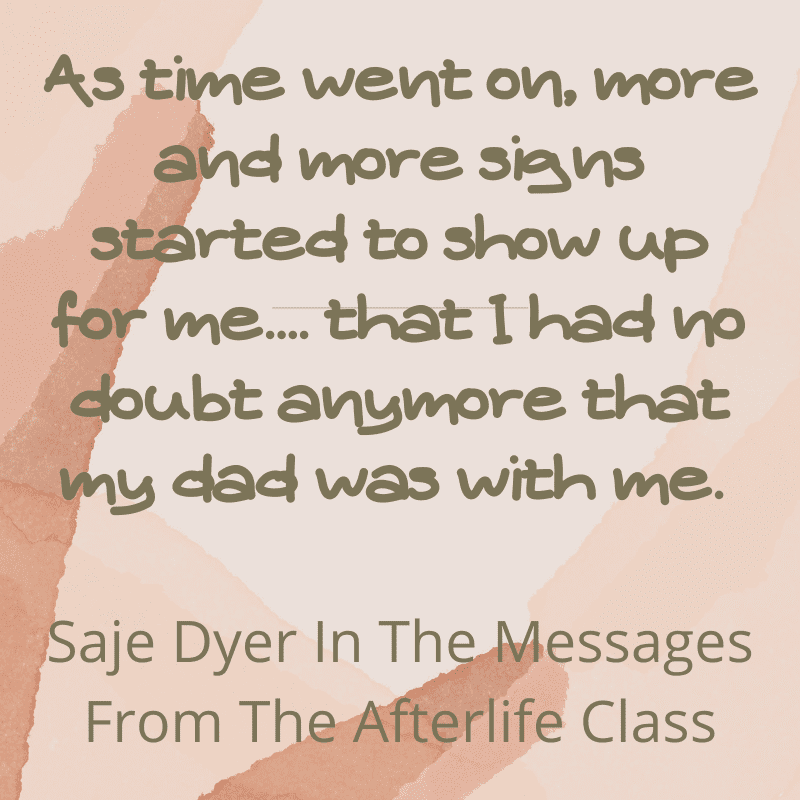 This free class is on something called the Humanity’s Team and it’s promoting a paid program called Life After Death.

I just realized that I wrote an email to them referring to them as Humanity Steam. Lol. Whoops. I was going off the URL and thought they were referring to the steam it takes to get humanity going. I don’t know.

This is a very new site to me even though it seems to have been around for a while. It looks a lot like Mindvalley, with different classes you can take, except they are mostly spiritual as far as I can tell.

In any case, I’m interested in it (mainly because of the Life After Death program so far) and may add something else to my ever-expanding to-do list pretty soon.

According to Karen Noe in the free video, the first time Wayne Dyer came through her, he apparently got her to rush his daughters out of a bathroom to get moving faster. She says he even overtook her body a bit.

And apparently, Karen Noe and Wayne’s daughters sat down, and Karen Noe hit some messages on the head that helped clarify that it really was him speaking through her. This includes congratulating Serena that she was pregnant… even when she didn’t know yet. And his message also told her the due date.

After that, Wayne Dyer has been speaking to the Dyer family through Karen Noe for years. And Serena says that there have been countless messages that make it clear that it’s really him speaking.

Some Interesting Points From The Message From The Afterlife Video

For the first 30 or so minutes of the video, Wayne Dyer’s daughters talk about their dad and some of the signs they’ve received from him.

There’s a very cute story about how Wayne Dyer liked the seat 2B on flights because he could say a joke around ‘To be or not to be.’ After he passed, Saje was upgraded on a flight to first class (without any effort or knowledge on her part) and she was put in seat 2B. She took it as a sign from her dad that he would always take care of her, even from spirit.

One of the points I really appreciated. I think it was Serena talking about how bad things kept happening to her and she thought she was manifesting them into her life and doing something wrong. But, she realized, that bad things happen to good people because they signed up to grow as a soul. So, it doesn’t mean that you are attracting bad things because of the law of attraction, but because you are meant to go through things where the message or outcome can help you create a better life and a better YOU.

Wayne Dyer apparently also told Karen that he wanted to share 33 concepts of the We Consciousness. The number 33 symbolizes divine guidance and the spiritual upliftment of all of mankind.

In the free class, Karen Noe shares a way to connect to loved ones who have passed. It’s simply to ask for signs and for them even to come in dreams, which is something I’ve been doing forever with no luck. She says that as much as we want to speak to deceased loved ones, they want to speak to us.

This 8-week masterclass by Wayne Dyer’s daughters and Karen Noe (and Wayne Dyer) is called Life After Death and includes Wayne Dyer’s teachings from spirit.

Things to note about the program.

I’m tempted to take it. I was never a huge fan of Wayne Dyer, but I liked him. We did go to Maui once to see him, but we canceled our tickets to see him because we were in MAUI and wanted to enjoy every minute of that.

I like the idea of Wayne Dyer, a popular voice in the personal growth niche, talking as a spirit.

If it’s true, you can’t get a better source of inspiration than that!

Where My Skepticism Comes In

I actually do believe in communicating with deceased people. I’ve had messages and signs from loved ones who have passed away. I’ve never outright communicated with them through speech; although, for years I’ve been trying to do that while dreaming… with no luck.

I guess a medium would have better luck? But, if they are able to talk to Wayne Dyer, why not talk to Louise Hay too? Or other notable people who had influence and have passed. It seems very convenient to talk to one person who can sell courses and books and not to all the other people that would likely have a lot to share from the point of view of a spirit.

Also, according to Karen Noe, when we leave the physical body we have the same personality as we had in life. Really? Yikes! Does that mean that my dad is going to be a cynical, grumpy, pessimist for eternity? I don’t like that idea. I would hope he has more optimism and awareness in the afterlife!

What do you think about it?

I think if it’s real, it can only be a good thing.

I will write a review of it if I sign up.