The last time I actually wrote a post on this site was about how my hair loss from alopecia was worse than it was the first time. I haven’t written since then because so much has been happening in my life, including my hair loss getting even worse. It’s all happened so fast. I haven’t lost all my hair, but the hair I do have on my head still falls out if I rough it up over a sink. Here’s what’s been happening since my last post.

Hair Not On My Head Has Been Falling Out

Not all of my eyelashes and eyebrows are gone, but a lot of it has left my head!

I was wondering why my eyes looked so tired. I figured I was just tired from all the things that have been going on. Then I went to curl my eyelashes before going out and realized that there were no eyelashes to curl! The ones that were there were so short they didn’t even go in the curler.

Even my armpit hair is gone.

Once I realized that all this was going on, and accepted it, it became apparent that my hair loss might get even worse. I started to figure I was heading towards Alopecia Universalis. This is something I’ve accepted but I’m not totally ready for.

I still haven’t seen a dermatologist for this round of alopecia, though. Apparently, I’ve been referred, but this was over a month and a half ago, and I haven’t heard a thing. I guess they don’t consider alopecia that important? I’m so grateful that this isn’t my first round with alopecia or I think I would be devastated and terrified not having any answers from someone who deals with alopecia.

My Hair Kept Falling Out

The amount of hair falling out was devastating to me. It was too much and it kept happening day after day. I wanted to shave it so I could just speed up the process and stop the daily concern.

Before I did that, I wanted to show my parents what my hair looked like. I hadn’t shown them yet and I wanted them to see what it was looking like before I did anything drastic like shaving my head. I figured a shaved head would be a much bigger shock to them.

It was extremely hard to show them. I haven’t seen a lot of people talking about showing their hair loss to friends and family, but it took a lot of courage for me to pull off my toque and show them all the bald spots. It almost felt like I had done something wrong and caused my hair to fall out and I didn’t want to admit that I had done that thing… whatever it was.

Once I showed them, I cut the hair I had left. I didn’t shave it. I just cut as close to my head as possible. And, it’s looked pretty much the same since I did that about 3 weeks ago. 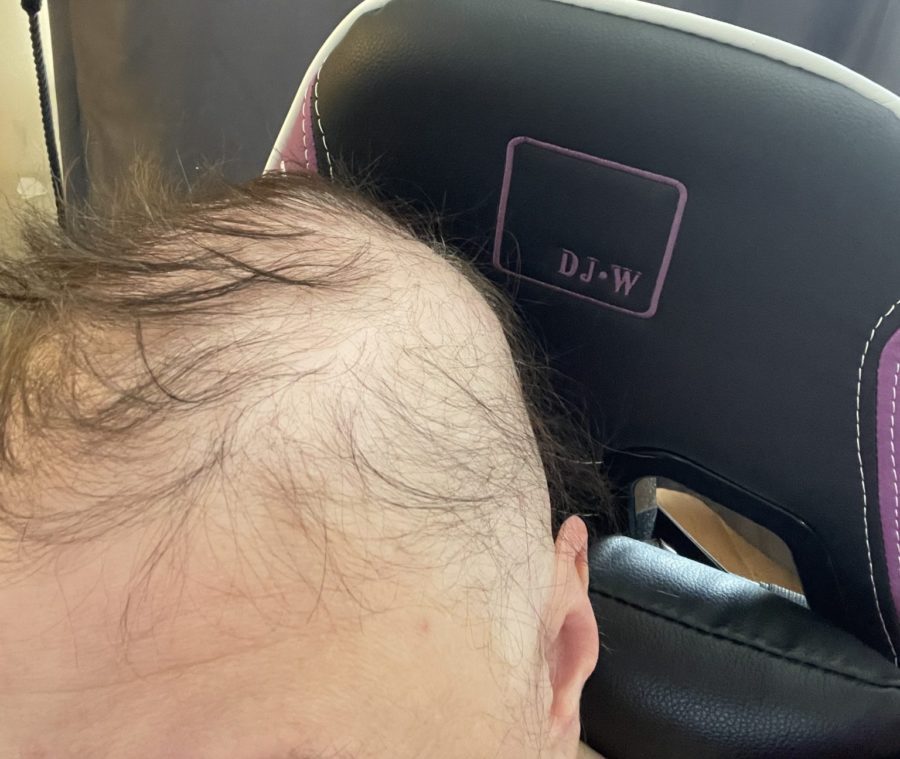 It feels much better to have cut it down. The hair that isn’t falling out was long, but there were so many bald spots in there that I realized that even if my hair does grow back, it will look crazy with a tiny bit of long hair and then a ton of short hair everywhere.

I’m not willing to shave it yet. I don’t know why. I think for me, it would represent that I’m giving up on it. But, if it doesn’t grow, I will be shaving it.

I think it just takes time to be OK with it.

I do like having an almost bald head with shorter hair. It felt weird at first, but now it kind of feels good. It feels light. It feels spacious. Lol. I don’t know. But, it feels better than having the long hair on there with all the bald spots.

I have some toques that I like, but I decided I wanted a wig. I wanted to be able to throw on a wig before going out instead of a toque or scarf.

I’m totally new to wigs, and I was totally outside of my comfort zone going to a wig store, but I did it.

I ended up making an appointment at a wig boutique near me. They have a long history in business and they have a big selection.

I don’t think I’ve been more nervous to do anything. Job interviews, first dates, the vaccine… nothing. I was so nervous to go into my appointment that I had to pump myself up to do it.

I spent at least 15 minutes talking myself into it so that I didn’t turn around and run away.

When I went in and met the girl who would be helping me, I felt a little more comfortable. It helped that she had alopecia too. It was the first time I had been around someone else with alopecia and it felt so nice.

I didn’t cry when I took off my toque to get ready for trying on wigs, which is where I thought I would cry.

Instead, I cried when I put on a wig and looked at the back and realized that it looked like my old hair. It just hit me… that’s what my hair looked like about two months ago and now I’m almost bald.

I couldn’t stop myself from crying. The girl was so nice about it. They had Kleenex ready, so I couldn’t have been the first person to cry in there.

Most Of The Wigs Looked Horrible On Me

I don’t have a face for many haircuts. This is what I realized when I was trying on wigs.

Long hair, short hair, bangs, no bangs, brown, white, blond…. most of the wigs looked really bad on me.

But I finally found a wig that I kind of liked. 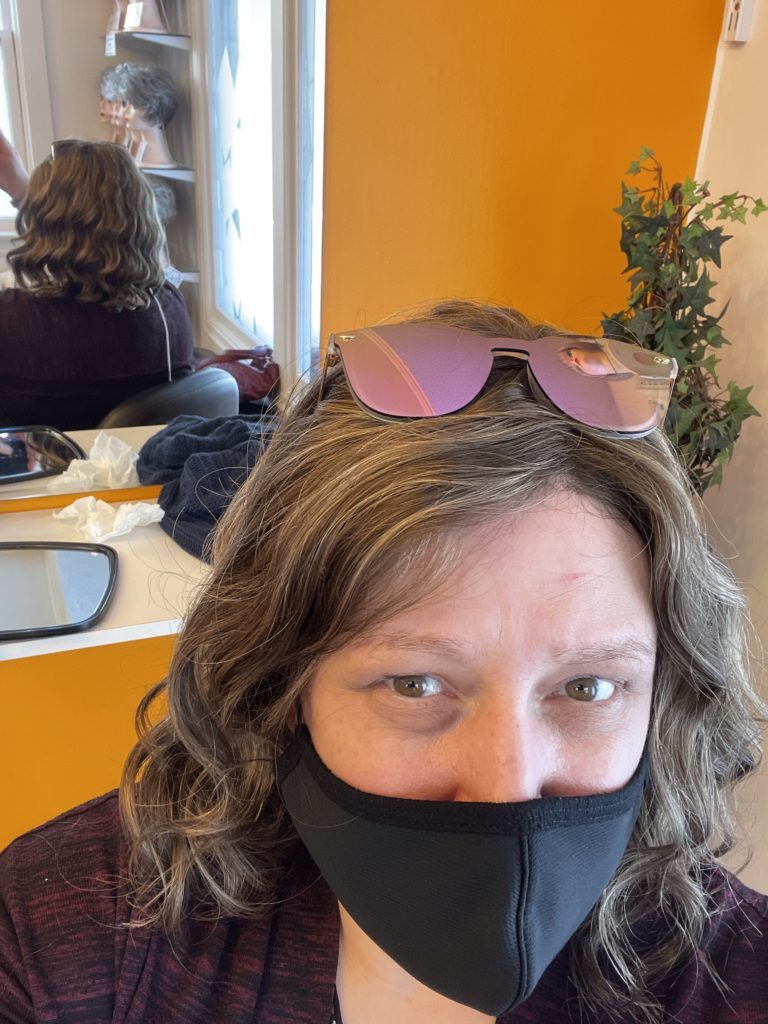 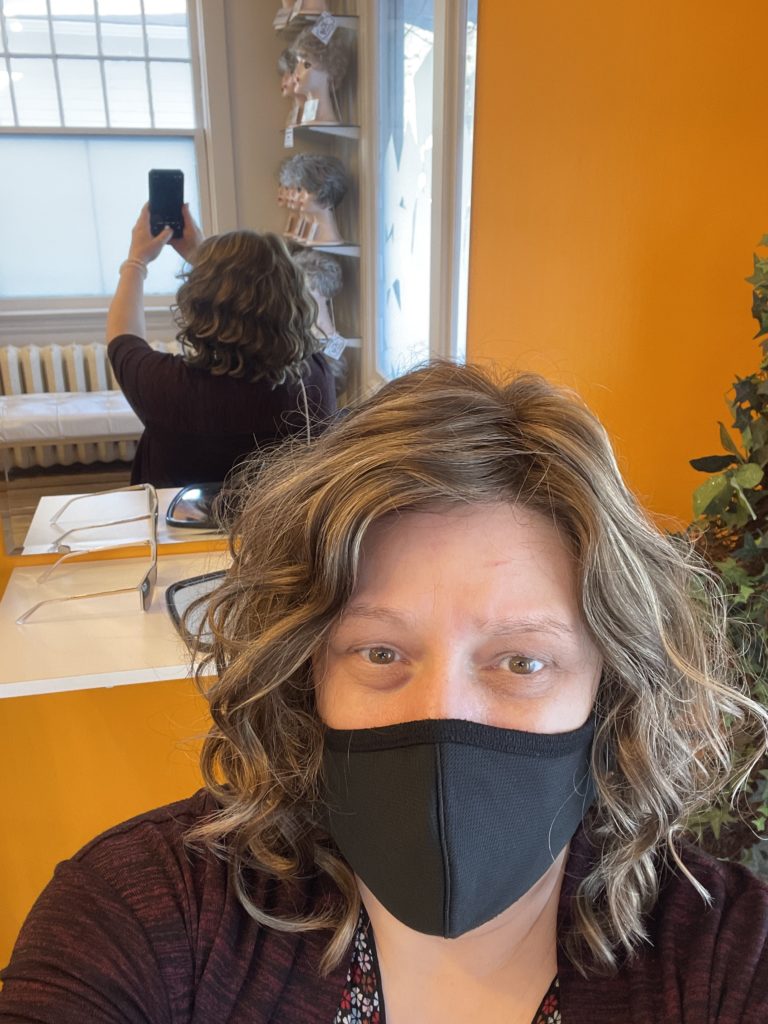 I was so scared to buy it and have buyer’s regret once I left. There’s no returning the wigs once you buy them, so the thought worried me.

I’ve always had straight, long hair parted in the middle, so this is a huge change for me.

But, since getting it home, I’ve been playing with it and have figured out how to make it work for me.

I did go back into the wig shop and get the wig thinned out a bit. It was just too much hair for me. The process involves using a special shear-like scissor to cut off some hair from the top of the wig. It couldn’t be thinned out as much as I would want it thinned out, but it felt better than before it was thinned out.

The other day, I even went out with it and did a bunch of errands, including going to the doctors and having them look at my ears, which meant them getting really close to the wig. Nobody looked twice at me, so that was nice.

I’m starting to feel pretty confident in it and I’m glad I got it. I plan to get the only other wig that looked good on me as soon as possible here.

I Have Alopecia, I’m Losing My Hair, And I Have To Deal With It

Even if it does grow back, it’s going to take some time this time. So I’ve had to accept that this is the way it’s going to be for a little bit – or maybe for a long time.

I’m not so upset about my body hair disappearing. It’s kind of nice not to have to shave or worry about that. But, I would like my eyebrows, eyelashes, and head hair to stay on.

I still think stress and hormones caused my alopecia. I’m almost certain of it. And I have hope that once those things get under wraps, my hair will grow back. But, if it doesn’t, I need to stock up on some wigs because I feel much more like myself when I’m wearing the wig.

My Experience With Alopecia

First Alopecia Update: End of May to August. (Getting Better)

Second Alopecia Update: August to the middle of December. (Getting Much Better)

Third Alopecia Update: January To Beginning Of March (Hair started falling out again and is much worse this time.) 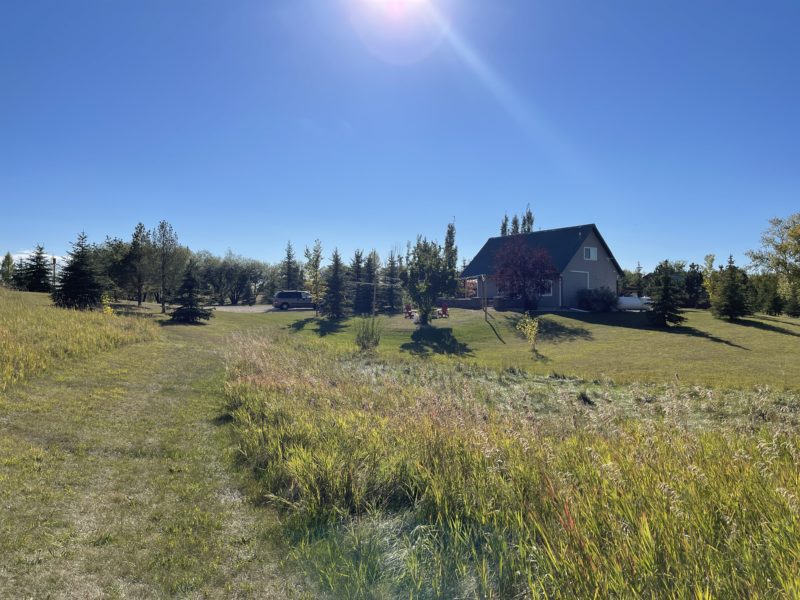