When you become vegan, you want everyone to become vegan. Not just because it would make it a lot easier to eat together, but because you know how great it feels to be vegan and you want other people – especially the people closest to you – to feel the same way. Unfortunately, you can’t force anyone to be something they don’t want to be, so you have to lead by example, try to show others how awesome it is to be vegan, and then one day, if you are lucky, someone you know will tell you that they want to try being vegan too. It’s a glorious feeling, but don’t get too excited or you might scare them off! Let’s talk about some important tips to help someone go vegan when they make a choice to try it out. 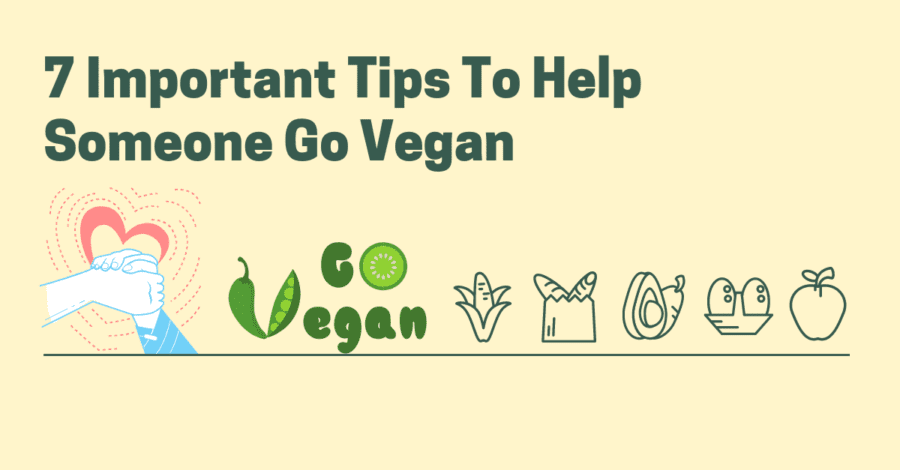 1. Find Out Why They Are Going Vegan So You Don’t Say Too Much

If your friend is going vegan for their health, the last thing you want to do is start bombarding them with information about how animals suffer to get on their plate or how veganism will benefit the planet. They likely won’t care about what you tell them and start to get annoyed about the whole thing, which could cause them to call the whole thing off!

If someone confides to you that they watched Gamechangers and feel like going vegan may help them with their fitness, then great, you know that they want to go vegan for their fitness and you can help them go down a path that solidifies the connection between better health and veganism.

You could recommend more documentaries on health or talk about recent studies you’ve read. Just don’t be too pushy because every new vegan needs to move at their own pace. They will only want to process new information when they are ready for it and if it aligns with their reasoning at the time.

2. Let Them Come To You With Questions

Don’t start offering up a ton of information that they don’t necessarily want. Information overload can turn them off from moving forward as it will just be easier to do what they know – eat meat or dairy.

Let them come to you with questions and then answer those questions as completely as possible.

You will probably get the standard questions, such as what should I eat to get protein? Do I need to supplement anything? Where can I find good vegan recipes that aren’t too complicated?

While some people will watch a documentary and become vegan overnight, some people are not going to drop everything and become vegan. They may take longer to switch over, and this can be painful to us vegans who want them to move faster than they are ready to do.

For instance, they may want to finish off all the meat and dairy in their home before they stock up with plant-based options. This can be frustrating as a vegan who has a stack of reasons not to eat meat and dairy and to just go vegan now, but you can’t express that frustration to someone who is just doing their best.

Understand that we are all moving at our own pace in this world with the information we have. Even if your friend says they are going to try to go vegan and then change their mind for no apparent reason, don’t get upset. Accept where they are at and continue to be a vegan role model that will hopefully convert them down the line.

4. Promote A Vegan Challenge If They Need It

Some people need to do things in their own way and find their own path forward into veganism. These tend to be people who are good at organizing and researching and coming up with plans. But not everyone is like that and some people need a little more guidance moving forward on their vegan journey.

Challenges are great because they allow the person to organize themselves and carve out a path moving forward.

You can direct them to a vegan challenge that allows them to be a little flexible as they move forward. This is great for people who don’t want a ton of information and just want to develop a plan moving forward that keeps them on a vegan track.

Or you can give them a lot of information by directing them to Veganuary, which they can sign up for all year round. It will give them recipe ideas, meal plans, and helpful tips that will come in handy as they move forward. If you haven’t tried it, you’ve probably heard of it, and it’s a great comprehensive package that allows them to really explore what being vegan is all about.

5. Let Them Know About Vegan Options Near Them

Even long-time vegans don’t know about some of the vegan options near them. It takes some digging and research and word of mouth sometimes to find the gem restaurants and retailers near you.

The more convenient it is to be vegan, the more likely it is someone will stay vegan, so let them know of options near them, including where to buy the best vegan options.

You can even let them know where to order the best vegan option online if they live in an area that isn’t vegan-friendly yet.

The fact that someone shared with you that they want to be vegan means that they are willing to share something with you that you both have an interest in. So, share what you are interested in when it comes to vegan food so that you can strengthen that bond.

Again, don’t go overboard because it could become too overwhelming. Gauge their responses and don’t push things too far.

Information overload can be a stressor when starting something outside of your comfort zone. Allow them to slowly expand their comfort zone by dripping them new information that they may not find elsewhere.

7. Don’t Make It Sound Like Going Vegan Is All Rainbows And Lollipops

Even though we love being vegan, there are some things that are annoying. Sometimes being vegan sucks, and that’s OK. It doesn’t mean that you or they shouldn’t be vegan.

For me, I openly admit that I miss mozzarella. It’s one thing that cannot be replaced as a vegan.

Too many people try to make going vegan look like a super easy venture (it can be for some, but not for everyone) which makes new vegans feel like something is wrong when they are not easily transitioning.

When I talk to people going vegan and share certain struggles that come with being vegan, they go into their vegan journey with a mindset that not everything is going to be a bed of roses, and this helps them trudge through the issues that arise – because they expected that there might be some issues along the way.