I finally took the Chakra Healing on Mindvalley by Anodea Judith. I started it a long time ago, but then I got distracted with other quests and things that were going on in my life, and I think that was for a reason. Anodea Judith has made this quest in a way to help you heal your chakras and then use them to help you manifest things you want into your life, and doing this course recently was the perfect time for me. After some other quests (especially one by Marisa Peer), I was more in tune with issues I was having, and through this quest, I was able to see how those issues were related to my chakras. I may not have been able to see that earlier. I finished Chakra Healing the other day. Here’s my experience with it.

Anodea Judith Is Down To Earth For A Chakra Teacher 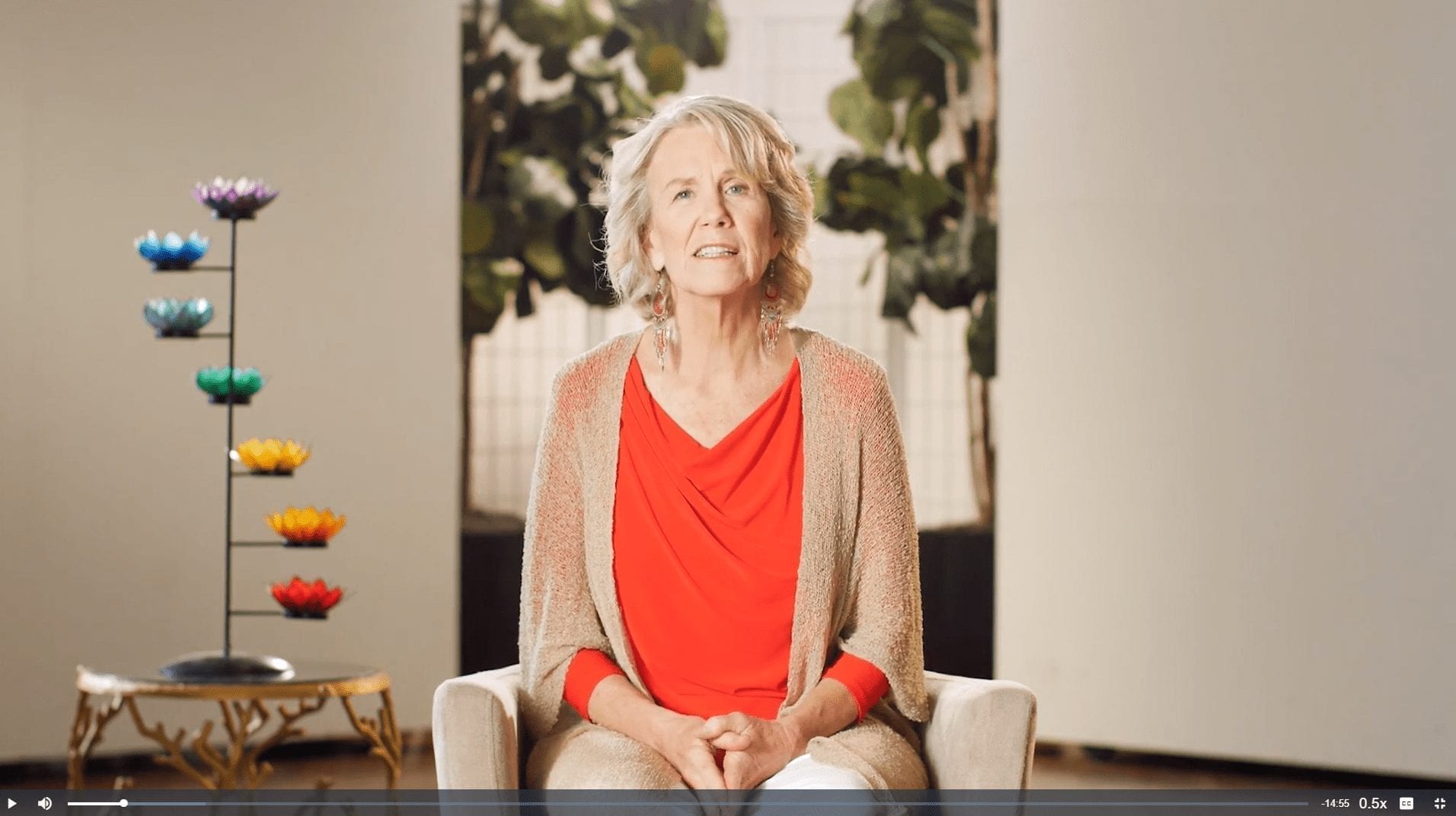 Anodea Judith did her videos with this chakra sculpture in the background and changed the color of her shirts to match each chakra.

First thing, Anodea Judith isn’t what I expected. Yes, she’s talking about the chakra system and how it relates to health, happiness, and success, as well as manifestation, but she doesn’t have that annoying over-the-top energy that many people who teach energetic stuff have. (I guess it’s because her chakras are balanced and are not excessive or deficient, which is something you will learn about as you go through this quest.)

I’m working on changing this, but I get annoyed by someone who seems to be ditzy and out in space all the time. Anodea Judith is NOT like that (at least not in this course). She is someone I could sit down with and talk to all day because her energy is very personable and relatable, even if she’s talking about little energetic wheels in our bodies!

Through the Chakra Healing quest, she did match her shirt to the color of the chakra she was talking about, which I found pleasing and cohesive with the quest material. You can see a little chakra sculpture in the background of the above screenshot, so you can tell that the screenshot was from the first chakra lesson because it’s red and her shirt is red.

Each Chakra Is Broken Down Into 3 Topics

For each of the 7 chakras, you learn how it relates to the psyche, body, and spirit.

At the end of the course, Anodea Judith does say that in her workshops, she usually spends a lot more time on each chakra then she did in this quest. While we got about 45 minutes on each chakra total in the quest (plus Q&A sessions), she said that she often spends hours or a full day on chakras in her courses. That’s definitely an incentive to go to one of her courses and check it out.

But, if you want to learn about chakras from home and get a good foundational base of knowledge and exercises to work from to understand and heal your chakras, then this quest is awesome.

I think that there was enough information taught by Anodea Judith in the Chakra Quest for most people who just want to learn about the chakras and how they relate to health and how to optimize them. I learned a lot about each chakra and how it relates to my overall health, happiness, and success.

You learn whether or not your chakras are balanced and what to do if they are not, which becomes more and more important as you go through the course and realize what out of balanced chakras mean for you.

Anodea Judith Gives You Chakra Challenges And Habits To Work With

To work with your chakras, Anodea Judith gives you some weekly challenges. She says to choose one challenge per week, so that’s what I did.

She also gives you daily habits that you can do for each chakra, which was really interesting. She called them skill sets. They helped you get into the chakra that you were learning about and pay attention to what it needs, as well as think about it in a way that you likely have never done.

Anodea Judith Helps You Recognize Your Energetic And Physical Connection

Just like Duality by Jeffrey Allen, Chakra Healing by Anodea Judith helps you pay more attention to your energetic self.

This quest helps you realize that your energetic self is working with your physical self for optimal health and happiness in life. And it helps you figure out how to combine the two in a way that is most beneficial to you.

What You Could Gain From The Chakra Quest

Here are some of the reasons you will want to learn from Anodea Judith in this quest.

I’m always surprised at how old wounds can hide from your awareness until you do something like this quest and start digging around. I’ve done a lot of digging through other quests, and I still found new wounds during this one that were holding me back in various ways.

In the ‘healing the psyche’ part for each chakra, Anodea Judith helps you take a look at when your chakra came into play and what could have created a block of flow in that chakra.

Let me just be clear… you will need to deal with some feelings in this quest.

For instance, in the ‘healing the psyche’ section of the heart chakra, and realized that my mother had shut down some natural aspects of me making me feel they were not acceptable, and I’ve kept them shut down with the reasoning that they were unacceptable. I’ve literally disowned that part of me and scolded myself when that part of me came out. Thanks to Anodea Judith and the Chakra Quest, I was able to reconnect with that part of me (despite knowing my mom would be thoroughly embarrassed by it) and stop feeling ashamed or guilty of it. And it’s really not that big of a thing. It’s instinctual for me to be animated when I talk, but my mom always found it embarrassing when I was a kid. I shame myself every time I’m a little over the top when talking to other people and criticize myself for days over it. My husband could never understand it. He says I’m not acting over the top at all, but in my head, I’m bouncing off the walls because my mom made me feel like I was acting crazy (she’s very reserved and doesn’t like to draw any attention to herself). Now, I allow myself to laugh a little louder and talk with expression because that’s me – that’s a part of who I am and I deserve to be accepted for that.

That was just one of the issues I uncovered in relation to my chakras.

A Better Presence For This World

Because I was taking this course during the pandemic, a lot of what Anodea Judith said resonated with me in a huge way.

For instance, she was talking about how this world is in crisis (she created this quest before COVID-19 was even a thought) and how we are devastating the environment that is trying to sustain us. She explains that tapping into our chakras and consciousness can help us change the trajectory of this planet. She emphasizes that we are all one and separation is an illusion (how true this has become lately!)

You realize that we can’t just serve ourselves anymore. We need to serve the world and be compassionate and operate from a place of balance and love.

Anodea Judith helps you think about these things and even helps you realize what it is that YOU should be focusing on in order to help heal the planet – or at the very least, do your part.

She says that we need lots of people manifesting their visions right now, and we don’t have a lot of time to waste.

I would say this is a powerful reason to learn from Anodea Judith in this Chakra Healing quest!

This was one of the unexpected parts of this quest, for me. I know that on the information page for the quest, it said that you would have a step by step plan for manifesting what you want in life, but I didn’t expect to learn such a detailed process of manifesting through the chakra system. But that is a big part of this quest – the manifesting current.

I’ve been very interested in the topic of manifestation since I was young, and this was a very unique and powerful process for manifesting that was presented.

It’s not ‘out there’ or anything like that. Anodea Judith focuses on how to use the principle of each chakra to your advantage as you go after what you want so that you can bring what you want into your life. It’s extremely interesting and empowering.

A big part of not being able to manifest what you want is limiting beliefs, and Anodea Judith taught a unique way to move limiting beliefs aside so that you can keep doing what you need to do in order to manifest the life you want. I’ve found myself using this technique almost hourly since I learned it. It’s been great for procrastination and motivation and even belief in myself. Her technique helps you discharge the energy around the limiting beliefs, which is something I’ve never thought of doing before – but it works really well.

Part of each chakra lesson is learning about when you are out of balance in the particular chakra. Anodea Judith illustrates what being deficient and excessive in each chakra looks like, and I guarantee you are going to see yourself and everyone you know in some of those extremes.

Once you realize whether you are deficient or excessive, you can start to do what she teaches for coming back into balance.

For example, if you feel like nothing means anything anymore and you find nothing sacred, then you are deficient in your Crown Chakra. This can cause you to treat yourself, other people, and the world like crap, which does nobody any favors, especially yourself. Alternatively, if you are living in your head and forget about your body and real-world issues, then you can have a hard time paying attention to things that demand your attention and be stuck in a know-it-all attitude. But when you get in balance, you can think for yourself, be open-minded, and be spiritually connected.

There are five Q&A sessions with Anodea Judith in the Chakra Quest. These are pre-recorded, but they contain a lot of interesting questions that I would have never even though of. They are time marked with questions so you can easily scroll through what you want to learn more about if you don’t want to watch them all the way through. 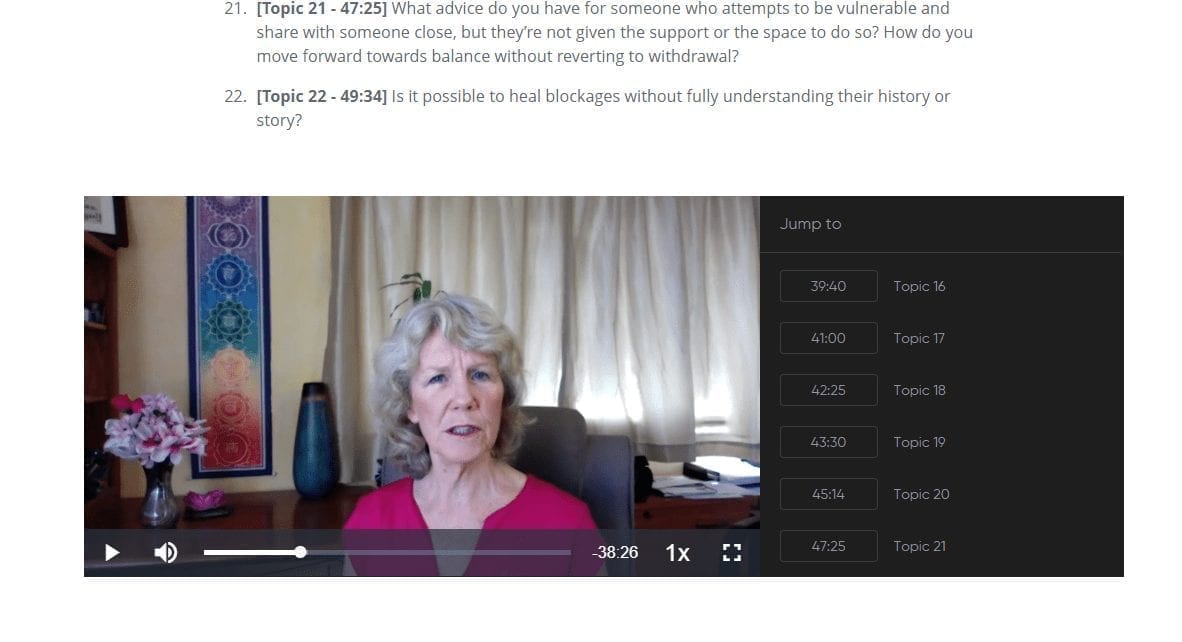 I Hope Mindvalley Brings Anodea Judith Back For Another Quest

There’s really nothing negative about this quest. She taught all she could in the time she had, and you get a solid foundation of knowledge around chakras, healing chakras, and manifesting using chakras, which is really all anyone needs.

I will be continuing on with my chakra learning after this quest. I find this stuff to be very fascinating. I’m hoping Mindvalley will bring Anodea Judith back to do another chakra quest of some sort. I would gladly learn more from her!

If you are interested in learning more, I recommend taking the free masterclass here. It helps you learn more about Anodea Judith and her style of teaching.

If you want to learn more about Anodea Judith and what the Chakra quest involves, then you can check out the registration page here that has all the information on it.

Lastly, if you are on the fence and you have questions about the Chakra Quest, please feel free to ask in the comment section below.